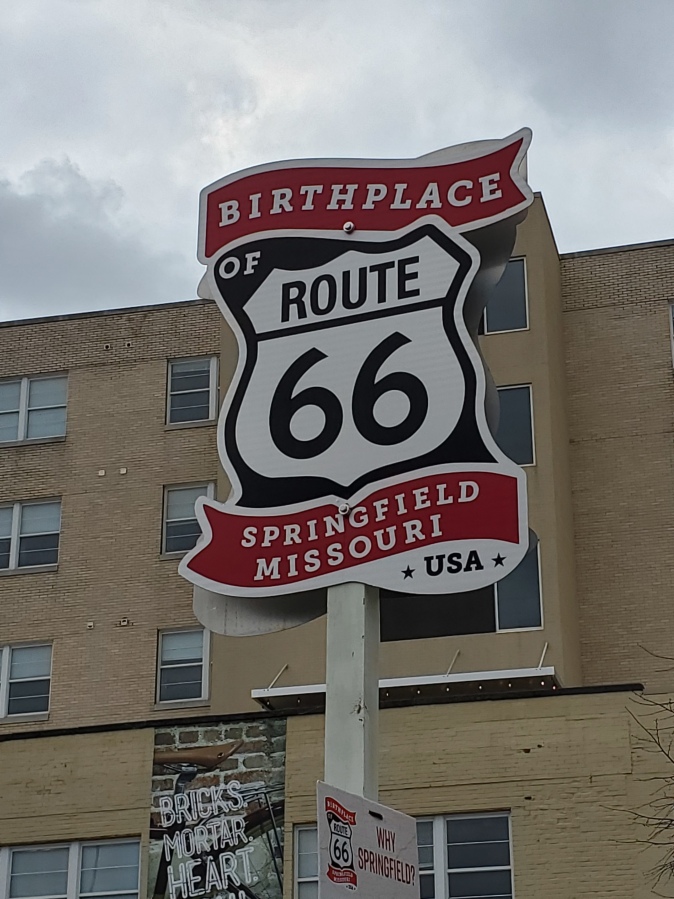 Llama and Karol have fully enjoyed their first day in the Birthplace of Route 66, Springfield, MO.

Route 66 starts in Chicago coming from the east, it is Springfield that gave it the official name and number. Historic 66 runs smack dab through Springfield and Llama’s hotel was right on it.

The first day in Springfield was cold and windy with teeny snow flurries. Llama and his companions did head out and walk about a 1/4 mile to find lunch. The woman at the visitor center suggested what they thought was Sybil’s Kitchen right down the street. She said they had yummy flash-fried brussel sprouts and Stephen’s eyes lit up. So off they went. After walking a few blocks, Karol asked the great almighty Google Maps for Sybil’s Kitchen and nothing popped up. The group figured they would just stumble across someplace. Right then the spotted their destination and boy did they feel silly.

Seriously, this place is the bomb. In addition to the classic pub vibe and excellent taste in background music, the food is excellent.

Karol had yummy french onion soup and an Argentinean malbec to chase away the chilly weather.

Cassandra had killer crab cakes from the appetizer menu and Stephen found a little slice of heaven with the brussel sprouts and his chicken and waffles. He split the two items apart and delighted in both. He shared a bite of the chicken with the chilli honey dip. It was something remarkable. Karol and Cassandra even were able to sneak some of the brussel sprouts from him. Yum!

After lunch they crossed the street to the European Cafe & Bakery. This little bakery/coffee shop had yummy treats and a little place to chill and relax. Karol had two shortbread cookies.

Cassandra and Stephen squared off in a game of chess.

Later that evening, Llama and friends got the friendlist Uber driver to take them to Tinga Tacos. This local place had llama art everywhere and yummy food. Llama tried, and couldn’t finish, the Crusher nachos, while Cassandra had two tacos including the namesake, Tinga.

The next day the sun was out and it was bit warmer, upper 30s. Llama and Karol set out to walk a bit more of Rt. 66. First spot was the visitor center again. The woman working today was extremely knowledgeable and gave Llama a ton of 66 swag.

Heading on down Llama checked out a bunch of sights along his 1-mile walk.

There is so much more to explore in Springfield and along this snippet of Route 66 but Llama only had a bit of time and it was chilly so it was a couple miles of walking and looking. He did find out some other interesting bits of history but that is for the next post.

Llama and Karol did have fun gettin their Kicks on this bit of Route 66.

The A to Z of Travel

Welcome to my travel blog! Check out my posts below and subscribe to keep updated!

Travel for Fun and Adventure

A girl travelling around the world on a motorcycle.

The Howlings and Humor of an Erstwhile Hippie

Recipes showing step by step directions with pictures and a printable recipe card.

Seeing the world, nearby or far away, with an open, adventurous mind.