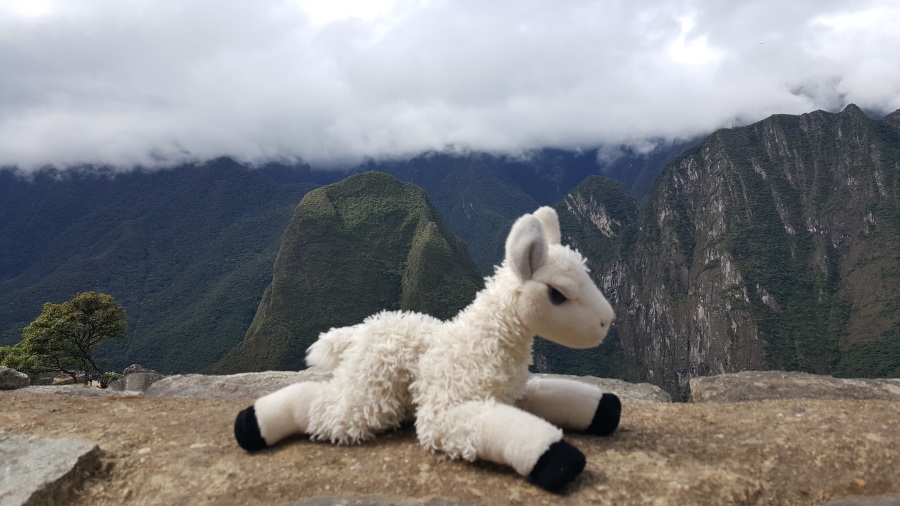 Recently Llama’s companion, Karol, was asked what has been her most favorite trip she has ever taken. This is always a tough question to answer for many reasons. This answer is more complicated than one might imagine because Llama’s companions find all travel wonderful even in small ways, each trip memorable in its own unique way.

When posed with this question, Llama didn’t flinch when choosing his answer – The trip where Llama met llamas and got to travel to his country of origin.

THE ANDES OF PERU!

As obvious as it would seem that Llama’s favorite trip would be the Andes of South America, there are so many reasons that June 2017 ranked as #1 for Llama.

Llama of course was excited to meet other llamas and alpacas in their natural habitat. In Cuzco, Llama saw friends at every turn and rejoiced at being able to pet them and stroke their cute heads.

At the ruins of Machu Picchu though, Karol had to step in and use her “teacher voice” to stop the large adult male llama from making a snack out of Llama. As the llama herd wandered past the humans, the herd couldn’t seem to care less. BUT, as the male passed Llama, he pulled up short, turned his head and came, open mouthed, toward Llama. Wow – back off dude. For some reason that llama wanted Llama.

Thanks Karol for protecting me. And thanks Lois for capturing the moment.

As you can see, Karol is wearing a Llama hat woven of llama wool that Llama helped her pick out. Though this hat is the coolest, the best part of this purchase and one of the things that made this trip Llama’s all time favorite is that he and Karol bought the hat from the woman who actually wove it. Maria is a beautiful woman who graciously agreed to have her picture taken with Karol and demonstrate how she wove her hats.

Timing is Everything, right?

When this trip was originally being planned, no real calendar was consulted. A date was picked to take advantage of vacation schedules and prices right before high season. [In fact Llama remembers it being decided in a bar at the top of Salzburg with probably a lot of adult beverages and crisp mountain air.] So when the group arrived and realized it was the week of the biggest festival all year in Cuzco, this became a second reason Peru is Llama’s favorite, serendipity and a look at local culture though festival. Every day and night were parades, pageantry, foods, and families gathering on the main square in Cuzco. Each province represented in color and clothing, floats and dance. Though it made Cuzco more crowded, it also made it so authentic and wonderful. All the celebrants were there for themselves. This was not a show for tourists, but for themselves.

Inti Raymi is held the week of June 21st, the Winter Solstice in the southern hemisphere. Down in Machu Picchu (it is actually lower than Cuzco) the sun rises on the solstice perfectly between a cleft in the mountains facing east from the ruins.

Early that morning, a smaller part of Llama’s travel group was up at the ruins for the sunrise. In another moment of serendipity, Llama, Karol, and friend Vicki, found a spot on a terrace right above a Shaman who was leading a group in the ancient ritual to welcome the sun. The pure beauty and spiritualness of this moment brought everyone to tears. This spiritual moment elevates Peru in Llama’s heart.

Peru had so much to offer but what lifted it in Llama’s mind are this, the specialness of the people, the serendipity of the moment, and the spiritual connection to the Earth and humankind. Peru at the Solstice is incomparable.

Okay, so if you read Llama’s first blog post, you know it took a millenial inferring Llama was old to get Llama to write a blog. It does seem that 2017 would have been WAY better time to start. Blame it on Karol. She told him he wouldn’t have time and his hooves weren’t up to it. Wrong wasn’t she. More on Peru next week. Peace.

(Interested in joining Llama on his next big trip, let him know. It will be African Safari 2022.)

A blog full of food stories